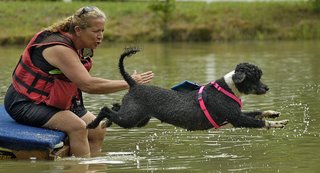 We covered our first Portuguese Water Dog Trial last month. What a treat! The trials are designed to emulate the work the dogs were originally bread for. To Quote the Dog Breed Info Center "Developed from working dogs brought by invaders and settlers to the Iberian Peninsula, the Portuguese Water Dog has aided Portuguese fisherman for many centuries. He herded and caught fish, carried messages between ships, retrieved anything that fell overboard, and guarded the catch and boats when in port. The dogs were valuable enough to be considered part of the crew and were given their share of both the fish and the money earned for the catch. Retired fisherman would often rent out their dogs to bring in some extra money. Gradually technology replaced the Portuguese Water Dog. Radios sent messages and winches pulled the nets. By the 1930's the breed was almost gone. Luckily, a wealthy shipping tycoon, Vasco Bensaude, took an interest in the Portuguese Water Dog and set out to gather fine specimens and start a breeding program. United States interest in the Portuguese Water Dog began in 1958 with the importation of the first pair. The Portuguese Water Dog Club of America was formed in 1972 and the breed was accepted for AKC registration in the early 1980's. In the United States, the highly intelligent Portuguese Water Dog is primarily a companion dog, but also excels at water trials, obedience, agility, and as a therapy dog and assistance dog.". Here's a picture from the training sessiion leading up to the event. Also thanks to the Movers and Shakers for having us.
Posted by ian at 12:26 PM

We still have openings for 2016. Please contact us to get on our shooting schedule.